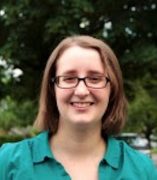 Originally from Oak Park, Maria has belonged to a multiracial church in North Lawndale for over twenty years and currently lives in Lawndale. She has worked in Little Village at the organization Taller de Jose for the past seven years, serving as the Office Administrator for three years and as the Program Director for four years. Taller de José accompanies individuals, serving as a bridge to connect them to the health, legal, and social services needed to achieve their goals. Maria has her B.A. in English Literature and Spanish from Calvin College and completed a Spanish immersion semester in Mérida, Yucatán, México. Before coming to Taller de José, she served through the Mennonite Voluntary Service program at South Texas Pro Bono Asylum Representation Project (ProBAR), which provides legal rights orientation and representation to migrants detained on the U.S.-Mexico border. Maria is excited for the opportunity to integrate her experiences in North Lawndale and Little Village by serving on the council.