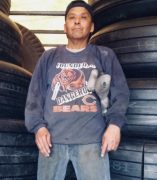 Virgilio Hernandez has been working with Chicago Community & Workers’ Rights (CCWR) for over 10 years. He greatly enjoys working with CCWR because it has improved his sense of self and also has helped him develop skills to fight for workers’ rights. Before organizing with CCWR, he worked at a junk yard where there were severe worker violations.  Tired with the abuse, he and other co-workers organized a strike.  It was at that moment that he realized that workers have power when they collectively work together. Virgilio became a leader figure at work, and since then, many workers call him when they have questions regarding their rights at work.